Being vegan in Japan doesn’t have to be disaster as long as you’re prepared and do your research on the do’s and don’ts. I’ve taken to Ain Soph one of the best known vegan joints in Tokyo to ask about their restaurant branches and vegan friendly menu’s. Starting off with just one restaurant in Shinjuku, Ain Soph has expanded opening up 3 more branches across the city.

Each branch is different and has it’s own story behind it offering a range of delicious vegan dishes. Ain Soph Ripple – 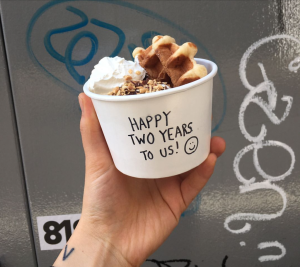 which just recently celebrated their 2 year anniversay –  however has taken on a more casual feel, which is where I went to speak with Director Hirohisa (Hiro) Yamagushi and media manager Yui Fujiyama.

Ain Soph started with one woman – Yuki, opening the flagship store was in Ginza.  After enduring troubles in her life her dream was to open up a place to represent her journey. Through her hardship Ain Soph Journey was born. A place for “people to feel at home and also for them to go through their own journey.”

From there with the success from Journey, and wanting to help others find their own path to succeed, Yuki went on to open up Soar. Yui explains “Soar represents after you’ve gone through that journey. Yuki wants people to ‘soar and rise’. Up until Soar, that’s all Yuki. That’s her journey. Ripple however is the first stores that she is hoping someone else achieves their dreams.”

Ripple is the first of its kind, an all vegan casual burger joint. Hiro (pictured above) explained since he is in a band he wanted somewhere to bring his friends and guests, “the reason for it being a burger spot and casual style is because there was no vegan restaurant in Japan that has this really casual style” adding, when people used to visit before he “didn’t really have anywhere to take them except for the fancy vegan restaurants.”

So what makes Ripple so special? Of course it’s always down to the (not so) secret ingredients, which explains why the basic cheeseburger at Ripple is the favourite item on the menu.

“In japan vegan burgers are mostly made with bean paste and you can tell that they are plant based. Here we use soy mushroom and a Japanese root vegetable called ‘Konyaku’. It’s called devils tongue which kind of has a jelly type texture. You can get it almost anywhere in Japan, and we use that to get the texture. A lot of people who come here, walk in and out without knowing it’s vegan”

It’s such a great accomplishment when we can recreate classic dishes using plant based ingredients, but usually it takes a lot of trial and error to find that perfect replacement. Although for Hiro, who has been working for Ain Soph since the beginning, firstly at the flagship location in Ginza says “during the whole nine years I spent time in the kitchen altering the menus at the other locations trying to make it my style. Then eventually came here so it’s taken a long time but the actual patty that we have here took about a month.”

Since experimenting with different ingredients to come up with new vegan friendly foods, I wondered whether there was anything new in store at Ripple, in terms of different dishes on the menu. Turns out there is something in the cards! The vegan egg. Ever heard of it? It’s apparently out in the U.S and something Ripple are keen to start playing around with.

“There is a Japanese dish called Oyakudon which literally translates into a bowl of ‘parent and child’ which is *laughs* kind of horrible because its chicken and egg….but we want to recreate that”

It is a bit of a brutal concept when we think of it, but hey! A vegan version sounds delightful.

Veganism in Japan isn’t quite as big as it is back at home in the UK or even US, but we spoke a little about whether it could become more and more common for people to make the transition in Japan. In reality a lot of the staff at Ain Soph are not vegan themselves and there is an understandable reason behind this. Ripple’s own chef used to be vegan however stopped due to the social aspect here in Japan.

Yui however who is a vegan, and grew up in the states explained “Japan is quite a collective society and you can’t really go against the rules or disturb the peace. It’s not considered a virtue to have your own opinion, that’s why when I personally meet a lot of Japanese vegans the first struggle is the social aspect, because they don’t want to mention to their friends that they are vegan, or go through the trouble of finding food.”

For Ripple’s chef, Hiro, he understands there are more younger people who are becoming vegan whereas the older generation tend to stick to more conservative lifestyle. “In order to reach the younger generation there needs to some kind of bridge” Hiro wants to act as that bridge and says when working with other company’s as a vegan chef “I give them my own food to try but I don’t like to say “no I can’t eat your food because I’m vegan” I felt that was rude. I obviously enjoy vegan food and want to spread the word, but it limits my abilities.”

With this taken in to consideration, for vegan foreigners coming over to Japan it can be a little difficult to adapt. However since there is a noticeable change in the younger generation in Japan who are taking an interest in veganism we spoke about whether this new wave would increase.

“Definitely I meet a lot more younger people who are interested. We opened Ripple 2 years ago and used to sit outside and listen to conversations of people walking by and no one would ever say “oh vegan, what is that?” but now if you sit outside and listen to people talking they say “oh a vegan burger!” So definitely more people know what it is – the term is getting out there.”

This can only mean good things right?! So it is difficult but not impossible to survive in this non-vegan metropolis. I asked Hiro what the best advise he could give for vegans in Japan was which he explained “There’s lots of fish sauce, so be careful of that!”

Yui who as mentioned before is also vegan said “Community is especially important because if you become a vegan and you are japanese there’s no one, or at least you think there is no one. But if you go online there are vegan meetups and there are a lot of people who go there.”

Ain Soph is definitely worth taking a trip to visit, if you’re into good food then its the place to go. Keep your diaries open for some exciting events too over the festive period too. Ripple recently collaborated with a London chef and told us over Christmas they are wanting to experiment with the traditional Cottage Pie

In the run up to Christmas on the 10th December there will be an Ikebana workshop taking place. This willl be a sort of Japanese style Christmas wreath making day, accompanied by amazing food and people, what more could you possibly want?!

As Yui said community is key for being vegan in Japan, so get involved and get yourself to Ain Soph!